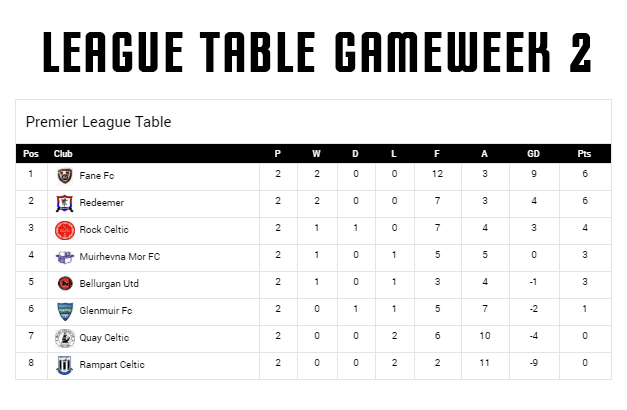 The Dundalk and District League continues this week with Fane FC sitting top of the standings after two rounds of fixtures.

A convincing 6–0 win over Rampart Celtic at Gorman Park last Wednesday night saw them maintain their good start to the season. Chad McEneaney was the Fane hero, scoring four goals with Sean Bailey and Cathal McGlade also on target.

Fane’s game with Redeemer Celtic, which was due to be played at Gorman Park on Tuesday night, was postponed due to the inclement weather.

The Cox’s Demesne side also have maximum points from their opening two games after seeing off Quay Celtic in a seven-goal thriller at Clancy Park on Saturday.

The outstanding Ryan McDonald put Redeemer ahead early on but goals from Robert Mackin and Ruairi Cooney saw the hosts go in 2–1 up at the break.

McDonald restored parity early in the second half and Thomas Daly put Redeemer 3–2 ahead before an outstanding goal from McDonald saw him complete his hat-trick and make it 4–2.

Quay Celtic kept knocking on the door and Mackin pulled a late goal back but it wasn’t enough for the Point Road side.

Meanwhile, on Sunday, Bellurgan United’s return to the Dundalk and District League was a winning one as a brace from Shane O’Brien helped them to a 3–1 win over Glenmuir.

The peninsula side were 2–0 up at the break thanks to O’Brien and Luke Higgins and they wrapped it up early in the second half. Paddy Nicholson got Glenmuir’s reply.